The Cardturner by Louis Sachar 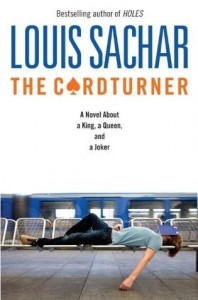 The Cardturner: A Novel About a King, a Queen and a Joker by Louis Sachar

This is very embarrassing.

Have you ever been in a situation where you’ve been with someone for a while and you don’t know that person’s name?  It’s too late to ask, but you know the longer you go without asking, the more awkward it will become.  So even though you feel really stupid, you finally just have to bite the bullet and say, “By the way, what’s your name?”

That’s how I’m feeling right now, only in reverse.  By the way, my name is Alton Richards.

Alton Richards needs a summer job, and his mother has just the one for him.  Alton is going to be the new cardturner for his blind, diabetic, bridge-playing “favorite uncle.”  His mother sees this as a way of staking the family’s claim on his uncle’s inheritance.  Alton just sees this as terrible way to spend his summer.  However, as Alton begins to take his uncle to bridge games and learn about the game, he also forms a relationship with his uncle.  And then he meets Toni Castaneda.  Suddenly, this job doesn’t seem quite so bad anymore.

Review: As an avid supporter/reader/cheerleader for Louis Sachar’s book Holes (amongst his many other great titles like There’s a Boy in the Girl’s Bathroom – LOVE!), I was thrilled to learn that he had written another novel called The Cardturner.  From the start, I knew that this book involved the game of Bridge which I know to be a difficult, hard-to-explain game.  However, I knew that if anyone could pull off a book with Bridge in it, Louis Sachar could.   He did not disappoint.  In traditional Louis Sachar style, this book is anything but typical – totally quirky, off-the-wall, and uniquely crafted.  At turns, this novel is heart-warming, witty, emotional and smart but throughout, it is definitely unconventional.

The first thing that struck me about this book was the unique narration style.  The protagonist, Alton Richards, breaks the fourth wall and crosses the boundary between the story and the audience.  He addresses us directly in a witty, self-effacing way.  Sometimes, I find this type of narration to be off-putting.  However, in this novel, it really draws you into the story and makes it seem like you are actually friends with Alton.  Alton was such a well-rounded character.  I felt for him and was cheering for him to succeed and come into his own through the whole novel.

In all of Louis Sachar’s books, he crafts such unique secondary characters that add depth and sparkle to his stories.  I loved Theodora with all of her new-age yoga and healthy ideas.  Cliff, Alton’s best “friend”, and Katie, Alton’s former girl-friend, made me both cringe and seethe with anger.  They often stood in Alton’s way to gaining confidence and finding true love.  I love when I hate characters like that!  They weren’t evil or some giant arch nemeses but they are the kind of characters that quietly needle you.  I find these kind of characters to be very true to life.

I was worried with all of the “Bridge speak” but it actually was well explained and fascinating.  Throughout the course of the novel, you will learn about the basics of Bridge and the vocabulary and plays associated with it.  Sachar puts an icon of a whale, referencing Moby Dick and all of the “whaling speak”, before large sections of Bridge explanations.  Therefore, if you want to skip these sections you can flip to the text box which summarizes the Bridge lesson.  The story is still cohesive even if you skip the whale sections.  However, I would suggest reading them as he writes these sections to be interesting and engaging.

Finally, I loved the budding relationship between Toni and Alton.  Based in assumptions, then friendship and finally romance, I found their relationship to be extremely palpable – rooted in the past but focused towards the future.  It was surprisingly refreshing to read about such a sweet pairing.

Louis Sachar really took a risk with this book.  A book about the game of Bridge?  Well, yes.  But it is so much more than that – it is a book about a young man challenging himself, learning about himself and growing.  Full of wacky characters, witty asides on life with an interesting magical, supernatural element that sneaks up on you, this book is sure to please.  I suggest picking up The Cardturner by Louis Sachar today!

Age Recommendation: 12 and up

For as long as I can remember, I have loved to read. I have always viewed words as having a magical quality-able to transport, illuminate and inspire. I was able to parlay this love of reading into a career as a language arts teacher and am able to encourage students every day to find books that “speak” to them. I decided to blog about the books I read because books are meant to be shared and discussed. 🙂

View all posts by Jen →
This entry was posted in Middle Grade Fiction, Young Adult Fiction. Bookmark the permalink.

5 Responses to The Cardturner by Louis Sachar