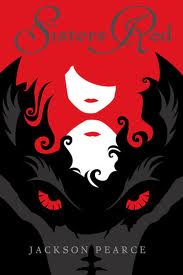 Scarlett took a step forward, then another, until she was so close to the monster that the rotting stench emanating from his throat choked her.  The wolf opened his wide, long jaws, rows of teeth and bloodstained tongue stretching for her.  A thought locked itself in Scarlet’s mind, and she repeated it over and over until it became a chant, a prayer:  I am the only one left to fight, so now I must kill you.

Two sisters, forever connected by a horrible incident that has come to define their existence, are at the heart of this fairy-tale inspired novel by Jackson Pearce.  Rosie and Scarlett March both bear the emotional scars gouged in them by the brutal murder of their beloved grandmother, Oma March, by a wild wolf called a Fenris when they were younger.  For Scarlett, the older sister, the scars are physical as well, a searing visual reminder of the wolves that shattered their existence and of the battle in which she saved her sister’s life.

When we meet again with Scarlet and Rosie, they have evolved into fierce hunters, hell-bent on eradicating the world of the Fenris who prey on unsuspecting girls and who killed their grandmother.   They are young women now, a far cry from the naïve little girls of yesterday; however, their bond so firmly formed in childhood is still intact – they feel as if they are each one half of the same heart.  Their days are spent intensely training – target practice, physical exercise, honing knife and hatchet throwing skills – for their nighttime fights.  And as if attempting to eradicate the evil wolf population wasn’t enough, life becomes even more complicated with the return of Silas, the handsome young woodcutter who often acts as Scarlet’s hunting partner.  The stakes climb even higher as Rosie, Scarlett and Silas move to Atlanta from their small town of Ellison to hunt the increasingly active pack.  The pack is searching for a Potential – a young man who can become a wolf with just one bite.  Silas, Rosie and Scarlett must band together to fight the growing evil that not only threatens their small group but the world around them.

Review:  Sisters Red is a beautifully rendered retelling of the classic story Little Red Riding Hood.  When we first meet the March sisters, we are thrust into their world rather suddenly as we experience the murder of Oma and the subsequent attack on young Scarlett.  An overwhelming sense of empathy is formed for these characters as we have undergone such a traumatic event with them first-hand; we are deeply invested with these two girls from the start – the sign of a truly skilled writer.  As Pearce begins to adeptly weave a tale of revenge, redemption and love, we are further drawn in – trapped in a delicious web of story.  Slowly, we learn about the characters.  Sweet, emotional Rosie, so tied to the past and her grandmother’s memory, but longing for a future that is not defined solely by the hunt.  Focused Scarlett who is single-minded in her need to avenge the death of her grandmother, the loss of part of her self, and her innocence.  Scarlett feels that with knowledge comes responsibility, that she and Rosie must protect those who are unknowing simply because they are all too aware of the evil that lurks in the shadows. And then there is the ruggedly handsome Silas who has long been a hunting partner to Scarlett, but who now begins to see grown-up Rosie in a different way.  Silas also longs for a life outside of hunting, a life full of love and adventure.  The characters, especially Silas and Rosie, are dimensional and relate-able.  We feel the inner conflict that they have with the knowledge of the Fenris and a sense of duty battling against a want for companionship, for wholeness.  At times, Scarlett appears to lack that same dimension; however, as an outsider we understand her unyielding and focused drive for revenge.  The wolves took her grandmother, cost her an eye and a normal existence.  It is only natural that Scarlett would want to take something back at any cost.

The plot builds slowly allowing the reader to fully recognize the danger that faces Silas, Rosie and Scarlett.  Packed with action, the fights between the hunters and the oily, foul-smelling Fenris are tightly written – the reader can easily imagine the fights as if they are part of a blockbuster film.  It is clear that Pearce has a firm grasp on descriptive writing.  As much as I enjoyed the fights, I do feel that there were times when they bogged the plot down slightly and marred the overall flow of the novel.  In the midst of the fighting and revenge-seeking, a romantic relationship is blooming in bright contrast to the bleak underbelly of society that we are shown.  As the reader, we are privy to the very beginnings of this relationship: the smiles, hidden glances, the excitement.  We are also privy to the secretive nature of it – how does one begin a relationship with another when you have been so connected to a singular person your whole life?  Even more enjoyable than the relationship is the growth that Rosie experiences throughout the course of the story, and the knowledge and strength that both Rosie and Scarlett exhibit at the end of the novel.

Sisters Red is a strongly written novel that  not only does justice to the original fairy tale but elevates it into something new and edgy.  With strong characters and plot, only marred occasionally by heavy-handed emotions and a few too many fight scenes, this book is an extremely enjoyable read!  If you like your fairy tales darkly told and served up with a side of good, old-fashioned vigilante justice, then pick up Sisters Red today.

Age Recommendation: 14 and up

For as long as I can remember, I have loved to read. I have always viewed words as having a magical quality-able to transport, illuminate and inspire. I was able to parlay this love of reading into a career as a language arts teacher and am able to encourage students every day to find books that “speak” to them. I decided to blog about the books I read because books are meant to be shared and discussed. 🙂

View all posts by Jen →
This entry was posted in Uncategorized. Bookmark the permalink.